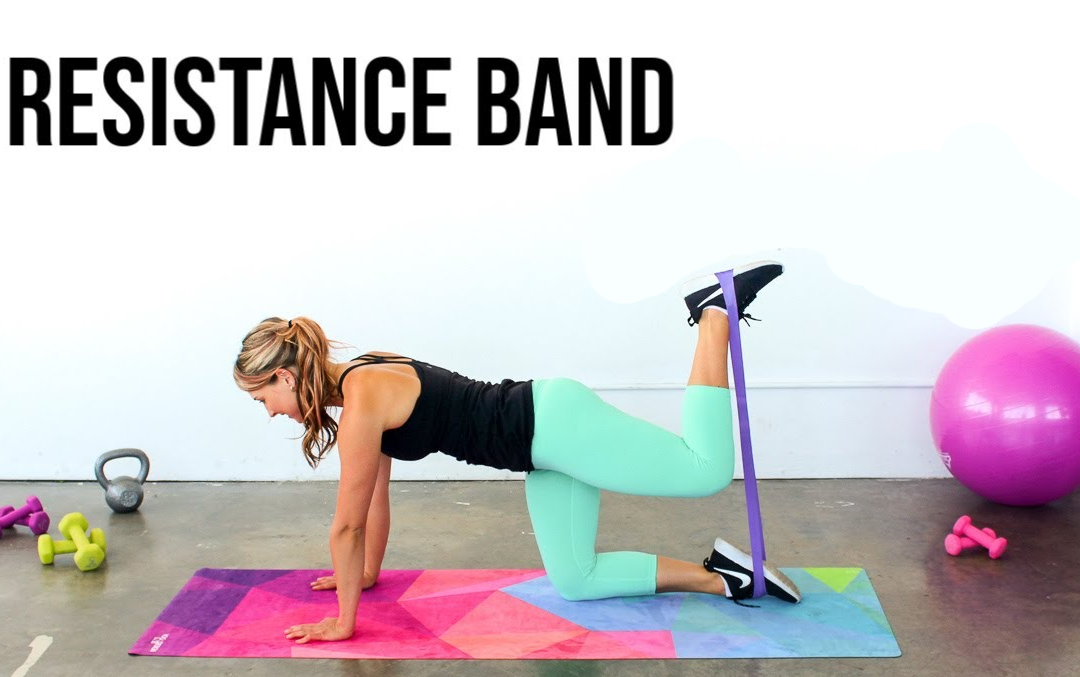 Don’t always have time to make it to the gym? Are you one of those who prefer to work out in the privacy of your own home? Looking for a workout that does not require a great deal of time or equipment but will still build muscle and increase your strength?

Resistance bands are a great way to get a safe and easy workout without the use of heavy gym equipment or weights. Strength training with free weights such as barbells and dumbbells utilizes gravity for resistance, meaning the weight is being pulled downward.

However, by attaching resistance bands to various surfaces, you know have the ability to make use of more angles. As well, they can be incorporated into traditional workouts such as dead lifts or squats. The more they stretch, the more resistant the bands become, meaning different movements will give you varying amounts of resistance.

A 2019 study stated that band-resistance workouts will provide similar strength gain to traditional weight lifting. Of course, this depends on the amount of resistance!

Following is a 9-minute at-home workout with resistance bands that is proven to tone and sculpt muscle while building strength!

This workout is great to do if you are pressed for time, traveling or new to resistance bands. As well, you can do it in as little as nine minutes in the privacy of your own home. You will do all 5 steps of the workout in three rounds, stopping only to rest 30 seconds between rounds. (Do not rest in-between steps.) Each exercise should take 90 seconds.

Work the muscles on the outside of your hips (gluteus medius and minus) using a mini resistance band. Place the mini band around your ankles. Begin with your knees bent and feet together, placing the weight in your heels. First, take a large step forward and the to the side at an angle of 45 degrees. Next, slowly bring back your foot with control. Repeat with the other foot. For 30 seconds, take four steps each forward and backward.

This step mimics a bench press workout, but without the weights. This exercise will work your shoulders, triceps, and chest. If it is too hard, you can use your knees instead.

Over your upper back, place the resistance band, grabbing one end with each hand. Get into the push-up position, using care. Proceed to do a normal push-up using the band for resistance. Repeat for 30 seconds.

This step works your hamstrings harder than a traditional dead lift in that you do not put the weight all the way back to the floor in-between repetitions. Place your resistance band on the floor horizontally. Stand up straight in the middle of the band. Placing your hands in front of your thighs, then lean forward and stick out your butt. Move hour hands to th middle of the shin before standing up again. Remember to keep your back flat the entire time. Repeat for 30 seconds.

The purpose of this exercise is to isolate the muscles in your back. The resistance band will help you to squeeze and contract these muscles. Set up the band in the same position as above (step 3). Grab one side of the band in each hand, while standing in the middle of the band. Lean over and stick your butt back as you did in step 3. Pull your elbows back as far as safely possible, while keeping your body totally still. Touch your hands to your ribs and then slowly place your arms forward, reaching as far as you can. Isolate the arms throughout the entirety of the workout without moving your legs or back. Repeat for 30 seconds.

This exercise is a combination of a shoulder and leg workout. It is best to use a tighter resistance band as it needs to stretch pretty far. Placing the band in the same spot as in Steps 3 & 4, stand in the middle of the band. Grabbing one end with each hand and standing tall, raise your hands up to your shoulders. Next, keeping your hands in that position, squat as low as you can. Stand up pressing the handles overhead so that our elbows are straight while out are once again standing tall. Repeat for 30 seconds.